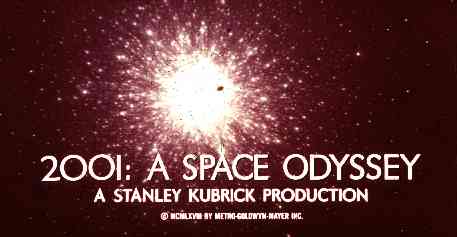 On Friday, December 28, 2001, I had the opportunity to see my favorite motion picture gloriously returned to the big screen. Join me now on the journey that is the 2001 experience.

The plot of 2001: A Space Odyssey has its genesis in a short story, Arthur C. Clarke's The Sentinel. However, the completed narrative arc, as the title suggests, was inspired by Homer's epic poem "The Odyssey" -- a story of returning home after a long voyage. In many other ways, the re-release of the movie itself is a "coming home." Most obviously, after 33 years, we once more found ourselves in the year 2001; the future had become the present. For Stanley Kubrick, it also marked an opportunity to revisit and restore his masterpiece; unfortunately he did not live to see it return to theaters. For me, this was not only an opportunity to return to Southern California, where I had lived for 12 years, but it was a chance to again experience the restored Egyptian Theater, which was sadly neglected at the time of my last visit in the mid-1980's. It was a chance to re-experience the never-repeated collaboration between the favorite science fiction writer and favorite movie director of my youth. But most importantly, seeing 2001 again was an opportunity to retrace a journey that I had first taken in 1968 -- 2001 allows the viewer to feel that they have actually taken an epic space voyage, through the magic of the motion picture screen.

The re-release of 2001 was limited to theaters in a few major cities. I saw it during a special 2-week engagement at the Egyptian Theatre, located on Hollywood Boulevard in Hollywood, California. The Egyptian is a beautifully-restored 1920's movie palace operated by the American Cinematheque. 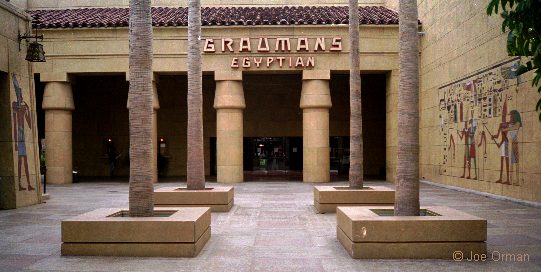 From the street, the theater is accessed through a palm-lined courtyard, decorated with Egyptian murals and sculpture. 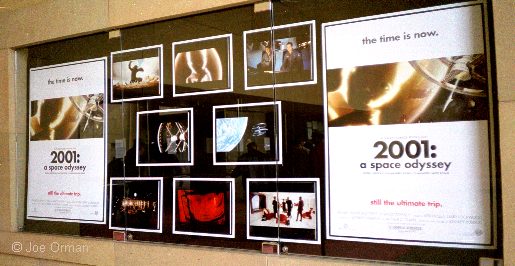 Entering the lobby I found a special exhibit for this engagement. 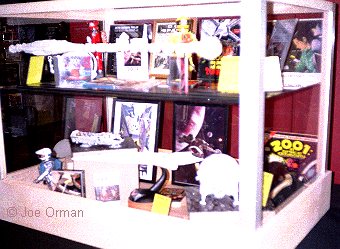 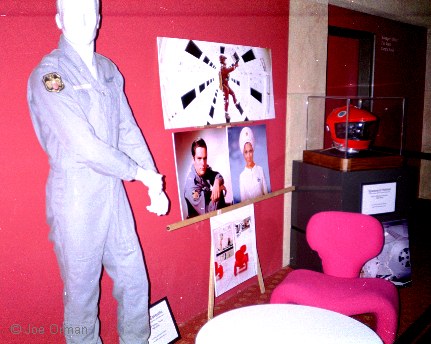 Props from the movie: Coveralls (left) and space helmet (right) worn by Keir Dullea, plus furniture from the space station (foreground).

Upon entering the theater itself and taking a seat (one of over 600), one cannot help but notice the magnificently-decorated ceiling, which incorporates the motifs of the sun-symbol and scarab beetle. All this adornment is intended to make a statement: movie-going should be an experience.

Kubrick kept the original 70mm negatives of 2001 preserved for over 30 years in his private vault, and this unprecedented level of care showed on the screen. Each frame was a vision of stunningly clarity; his unparalleled use of color and visual composition was designed for the big screen. Kubrick's inspired choice of classical music to compliment the visual imagery was reinforced by 6-track stereo sound. This presentation appropriately included the film's original prelude, intermission, and coda, giving the music the honored place it deserves. In short, an epic of this magnitude is only done justice in a 70mm theatrical presentation -- something the following images, from a vintage 35mm theatrical trailer, cannot come close to conveying.

I had previously seen 2001 at least a half-dozen times in the theater, and several additional times on television. But it had been at least 15 years since my last viewing. How does the story itself hold up? 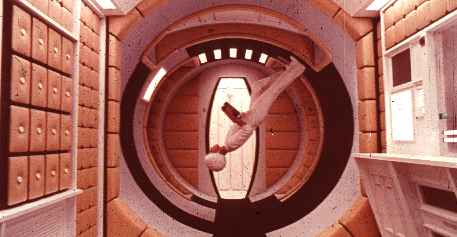 First, I believe that it is pointless to compare the vision of the future as shown in the film against our present level of technology and spaceflight. Those who scrutinize the movie looking for anachronisms or failed predictions will find plenty. But 2001 is not a prediction, it is mythology; that particular year was chosen because it is the beginning of a new millennium. Likewise, those who insist the movie has no plot are mistaken; when it is understood that 2001 is a bold experiment in visual storytelling, the arc of the story can be seen to be strong and clear; there is hardly a single shot in the movie that is gratuitous; indeed, some scenes offer several different layers of meaning. Only after one grasps the basic plot structure, which admittedly may take several viewings, can the movie be enjoyed as intended: on a purely visceral level. On these terms, 2001, like all mythology, exists in a timeless realm because it speaks to the most basic and universal human experience. Finally, some may fault the movie's special effects in comparison to modern computer-generated movies. However, 2001, was composed with an eye to both documentary-level realism and artistic composition, and on this basis its imagery remains nearly flawless. From this perspective, the clarity of Kubrick's vision is stunning and unsurpassed. While admitting that any attempt to convey the experience in words is futile, I would like to share a few of my observations. 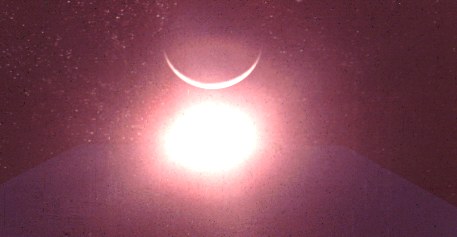 "The blasting shout of the orchestra, evoking the joy of the philosopher in contemplating the dawn, conveys the splendour of space and the exaltation of travel in it with overwhelming grandeur." -- John Baxter, Science Fiction in the Cinema

The movie's opening title -- an interplanetary sunrise set to Richard Strauss' Also Sprach Zarathustra -- has been much imitated and satirized, but remains a moment of breathtaking transcendence. The sequence that follows, entitled "The Dawn of Man," moves much quicker than I had remembered. In tightly-constructed set-pieces, Kubrick shows us a tribe of ape-men changed (by the appearance of alien intelligence in the form of a monolith) from passive vegetarians to club-wielding carnivores. We grasp that humanity has been pushed along a different path. But we also see that just as quickly as they were invented, the tools of hunting are transformed to offensive weapons; the ape-men themselves have been transformed from victims to aggressors. 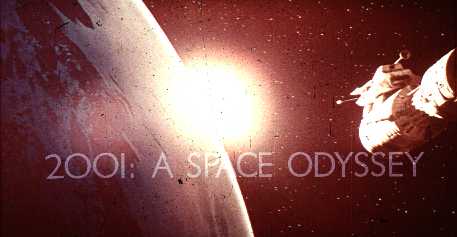 Even more quickly, we are brought to the year 2001, where the descendant of the ape-man's club is an armada of orbiting nuclear weapons. 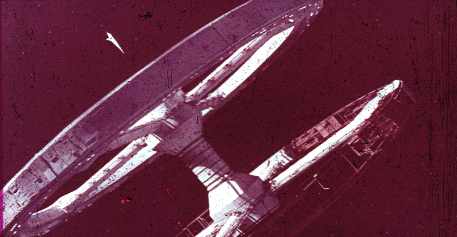 "Alone among science fiction movies, 2001 is not concerned with thrilling us, but with inspiring our awe." -- Roger Ebert

On this leg of our journey we travel from the Earth to the moon -- mankind escaping the cradle. 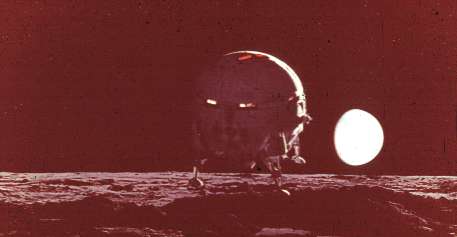 Again, I discovered previously unseen layers of meaning: for instance, as we approach the moon, we see that our destination (the crater Tycho), lies on the border between shadow and sunlight. This is not only part of the recurring symbolism of new beginnings, it is an important plot point because that sunlight will soon fall on the surface of a second monolith, for the first time in 4 million years. This will set off the alarm that awakes us from our cosmic isolation and pushes us to take our next step -- to the outer solar system. 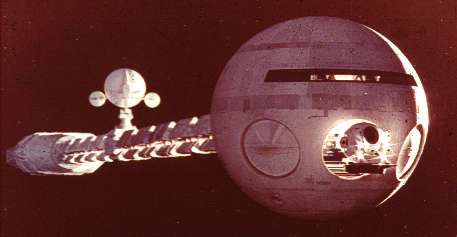 "...and for millions of years, it has been waiting for you to come." -- original soundtrack LP liner notes

It was during the sequence showing the mission to Jupiter that I became aware of another of these layers of meaning: men no longer advance themselves through the use of mere physical tools, but also through the control and exchange of information. In fact, it is the withholding of information that provides the narrative's key plot point; the computer HAL experiences a nervous breakdown because it has been programmed to withhold information from the crew about the true nature of the mission. I see clearly now that the final breakdown occurs when Frank Poole (Gary Lockwood) persists in questioning HAL about the slightest chance that a HAL 9000 computer has ever made an error; the request is so vaguely yet strongly (even sarcastically) worded that it applies to the withholding of secret information -- but to admit that would violate HAL's programming. This is a conflict with no logical resolution, and disaster ensues.

To read my complete analysis of the programming conflicts that lead to HAL's nervous breakdown, click here. 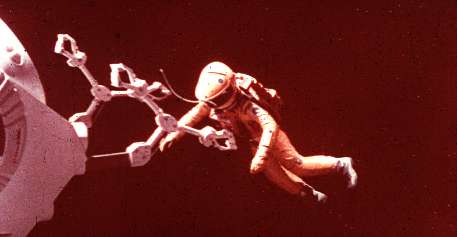 "What I'm after is a majestic visual experience." -- Stanley Kubrick

It was also in the Jupiter mission sequence that I noticed the amount of humor that the movie contains. It has been claimed that there is only one intentional joke in the movie (the "Zero Gravity Toilet"), but I found many more examples. Granted, much of the humor is very dark, but remember, Kubrick is the same man who brought us Dr. Strangelove. In particular, some of HAL's laconic dialog elicited laughter from the audience -- for instance, telling astronaut David Bowman (Keir Dullea) that re-entering the space ship will be difficult "without your space helmet," and advising him to "take a stress pill." 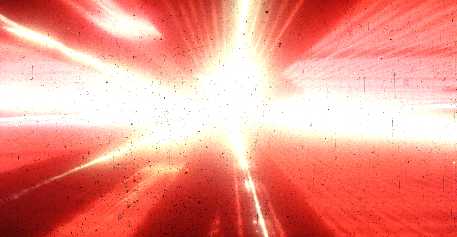 "If 2001 has stirred your emotions, your subconscious, your mythological yearnings, then it has succeeded." -- Stanley Kubrick

The film's climactic sequence, in which we encounter the "Star Gate" monolith and travel "Beyond the Infinite" with Bowman, is the most purely visual, and as such cannot be adequately described. But I would say that this is the only part of the movie that I would change. While the "tunnel of light" and exploding galaxy effects remain powerful, the alien planet scenes (obviously earth landscapes filmed in psychedelic colors) seem overlong and mundane by today's standards; most of them could be edited out. [After writing this, I read the following in Alexander Walker's article 2001: A Space Odyssey Revisited: "Just before his death, Kubrick was supervising the restoration of 2001 for a major reissue now planned for the eponymous year of the title. He told me he was tempted to rework the Star Gate sequence ... We hope benignly that Kubrick felt that the abstract expressionist phenomena representing his passage ... had become a little dated in the age of digital computerization ... As it turned out, Stanley was not granted the time to tinker with his original."] The movie's final visual (the "Star-Child") has been called everything from totally sublime to totally confusing, but a student of mythology will recognize it as inevitable and transcendent. His quest fulfilled, the hero must return home, and in doing so must be reborn. 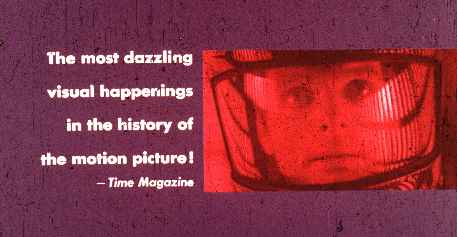 "The critics loved it. The critics hated it." -- The Making of Kubrick's 2001, edited by Jerome Agel

As I mentioned, there are enough layers of meaning here to provide discovery and debate well into this new century. I do not have the time to explore them all; there are many web sites that have done a much more exhaustive job than I ever could. So where has my 2001 odyssey brought me, on this, the last day of the title year? Certainly, there has never been a more realistic depiction of space travel. Also, there has never been a more thoughtful and thought-provoking motion picture. Simply put, neither before or since has there been a more moving motion picture. Even after all these years, to experience it again is to be born again, again. 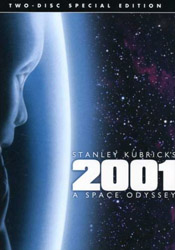 Listen to the remastered soundtrack CD from Turner/Rhino: 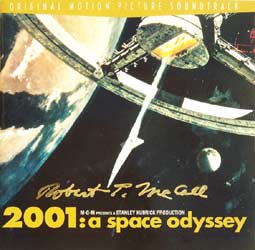 My copy was personally signed by artist Robert T. McCall when I met him on August 19, 2005 (click to enlarge).


Listen to the Original soundtrack LP (out of print): 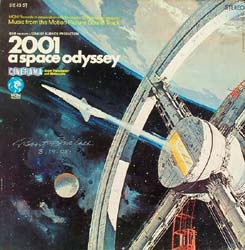 My copy was personally signed by artist Robert T. McCall when I met him on August 19, 2005 (click to enlarge).

Read Clarke's account of the writing of the novel: 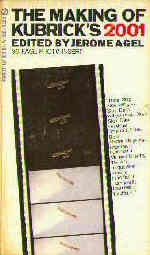 Read "The Making of 2001 : A Space Odyssey" (one of the Modern Library series "The Movies" edited by Martin Scorsese) : 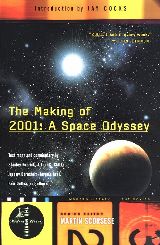 Read about the film's art design in "2001: Filming the Future" by Piers Bizony: 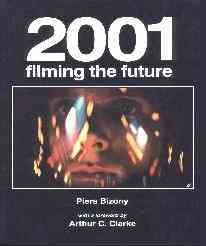